Debbie began her freelance writing career producing form studies for the website and text service of UK satellite racing channel, Attheraces (now Sky Sports Racing), covering all the major meetings including the Aintree and Cheltenham Festivals, the Epsom Derby and Royal Ascot. She continues to write form guides for UK Arabian racing which are published in the Arabian Racing Organisation and Weatherbys racecards and reproduced in the Racing Post.

A winner of the Dubai International Arabian Races Feature Article Award on her first attempt in 2012, she won again in 2015, having been runner-up in 2014. She was also runner-up in the online category in  2013.

She is a regular contributor to:

Her work has also been published in:

(magazine of the QREC HH The Amirs Sword Festival) 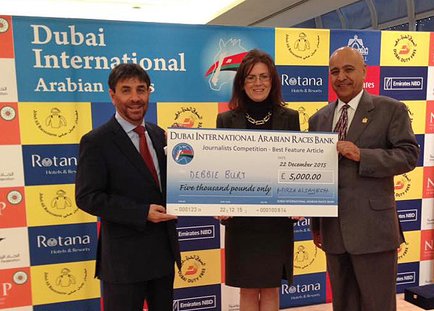 Receiving  the prize for the